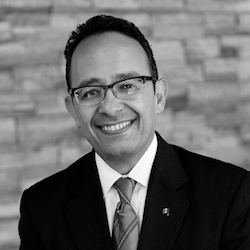 Ambassador Carlos González Gutiérrez is the Consul General of Mexico in San Diego, ratified by the Mexican Senate on April 2019. As a career diplomat since 1987, Ambassador González Gutiérrez has specialized in Mexican communities in the US, as all of his designations abroad have been in the US.

In Mexico, in the late 90’s, he worked in the Program for Mexican Communities Abroad at the Ministry of Foreign Affairs, and from 2003 to 2009, he was the founding Executive Director of the Institute of Mexicans Abroad, the agency in charge of promoting ties and collaboration between Mexico and its diaspora.

Overseas, he has been posted to four posts. Early in his career, he was the Consul for Community Affairs at the Consulate General of Mexico in Los Angeles. Then, from 1999 to 2003 he was appointed as Counselor for Latino Affairs at the Mexican Embassy in Washington D.C.

In 2009, González Gutiérrez was appointed for the first time Head of Post as Consul General of Mexico in Sacramento. Besides the regular consular activities, he was in charge of monitoring public policies implemented in the state that could affect Mexico or Mexican communities in California, given that Sacramento is the seat of the powers of the state.

After six years in Sacramento, Ambassador González Gutiérrez was transferred to another capital city as Consul General of Mexico in Austin, having to report yet again the public policies of Texas, as much as to look after the daily general services of the Consulate for Mexicans in areas such as documentation, protection and community development.

In September 2011, he was promoted by the President of Mexico to the rank of Ambassador.

Ambassador González Gutiérrez is married to Alina. They have two daughters: Marina and Camila.