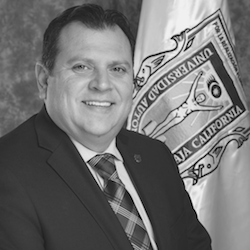 He earned his bachelor’s degree in legal studies from UABC. His Master's degree with honors and Ph.D. in Law from the Mexican Law school of the Autonomous University of Baja California. Dr. Valdez Delgadillo's research focuses on Human Rights, as well as theory and practice of conditiona justice by the University of Castilla La Mancha, Spain. He has publications on topics such as legal reality and administration of the judiciary, among others, and has the recognition of the Desirable Profile granted by the Secretary of Public Education of the Mexican Federal Government.

From 2000 to 2003 he served as a faculty member and from 2003 to date he is a full-time professor at the School of Law, Mexicali. He also held the position of administrator, whitin the same school of law, and from 2013 to January 2019 he served as director. At the level of the central administration of the UABC, he has held the position of Head of the Student Affairs Department of the General Directorate of Student Welfare and Coordinator of Student Services and School Management. From January 2019 to date, he is Rector of the UABC.